Established in 2012, Elk Studios is a Swedish software provider that specializes in slot games.

Like many upcoming game studios, Elk Studios are dedicated to providing their customer base with visually stunning and highly original games.

In a market as saturated as the online gambling industry, it can be difficult for a provider to make a mark. Elk Studios has definitely laboured towards making a mark of their own with their creative team.

Let’s see what they have to offer.

Most of these have carefully crafted graphics and a storytelling element. We find that there’s no better way to create a compelling game than to pull the player into a whole different world, with its own atmosphere.

Here are some of our favourites among their selection:

As we mentioned, Elk Studios makes the effort of linking their slots’ gameplay to whatever world the game is set in. Here, in this 5×4 slot game, you find yourself in the shoes of famous sea pirate Anne Bonny. 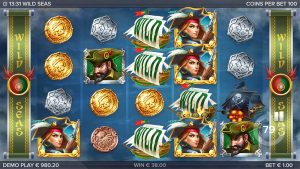 Ships scatter across the reels as wild cards, and the player is prompted to loot them in order to get to the next level. You’ll get propelled to a second level once you’ve bombed the ships – in this level, you can go into a looting frenzy, with wild cards galore.

That is, unless your spins land you with a barrel of explosives. These throw you back into the base game.

Inspired by the famous ‘Kaiju’ in Japanese monster movies (Godzilla being the most popular one), this 5-reel game throws the player into a futuristic battle for survival against gorgeously designed monsters.

The aesthetics of this game are very pleasing, with neon colours and sci-fi elements. You are a cyborg character whose goal is to stop the Kaiju’s murderous rampage by collecting crystals.

This game is meant to be played in portrait mode, which is its most interesting feature. Thanks to the expanding reels and vertical laser beams that generate wild cards, this game will have you hooked in no time.

If you want to see what Elk Studios are up to these days, then check out their latest game, Platooners.

Set in a jungle environment, this 5-reel slot game also contains a few new features that the casual player will find unusual and refreshing.

The gameplay is built around three characters, the ‘Platooners’, who blast through the reels and help or hinder you in various ways.

You’ll find quite a few casinos who’ve been tempted enough by Elk Studios’ state-of-the-art games to include them in their game selections.

Among the best of these, you’ll find:

If you check them out, you’ll be able to play on Elk Studios games with the generous 100% deposit match welcome bonuses that they provide for newcomers.

And feel free to look around for other bonuses too. Elk Studios games makes for a great choice when it comes to spending all of your bonus cash – cha ching!