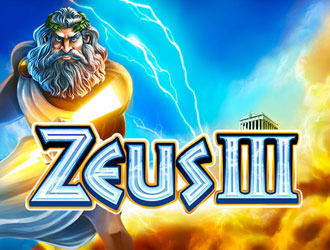 Zeus III – rather obviously – is yet another instalment in this WMS developed series. With better graphic than its predecessors, and a rather freaky 6 reels and 192 paylines of gameplay, this slot certainly stands out. However, is Zeus III really that different from its predecessors?

Not really, no. You won’t be able to wager on each individual payline, but you can still stake anything from a low of just 40p per spin, up to a maximum of £120 per spin. A top prize worth 15,000 coins is there to be won, too, in this Greek mythology themed slot, but it is non-progressive in nature.

Zeus III features the Reel Boost engine from WMS Gaming, and it is the first slot to do so. As you will no doubt notice, there are not the same number of symbols on each reel, making it more difficult for you to land big wins.

This slot does contain a wild icon in the form of Zeus himself, and whilst it can be useful during the base game, the wild only really plays its part during a free spins bonus feature. To activate that feature, you need to land 3 or more coliseum icons across consecutive reels in the base game.

Players will either start with 10, 25, or 50 free spins for landing 3, 4, or 5 such free spin symbols on the reels. As well as those free spins, they will also pocket scattered win prizes for landing the symbols. In the free spins bonus, players can use wilds to great effect. Any one which lands on the reels will nudge itself onto other reels, in what WMS Gaming are calling their Nudging Wilds feature. With wilds appearing stacked across whole reels, this can result in fairly sizeable wins.

Zeus III has enough clout to command big wins, and its nudging wilds feature is wholly new. However, in terms of imagery and theme, there is precious little between this slot and its predecessors. If you loved the first few games – and many do – then you are obviously compelled to have a look at this title.