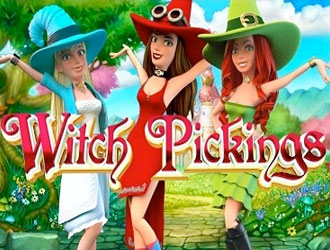 You might think that this new NextGen Gaming developed video slot may gather more attention when Halloween comes into view. You only have to have a look at it to see why this slot is ideal throughout the year. Witch Pickings is, of course, a pun on rich pickings, but this slot is far more fairy-like than its ghouls and goblins title much suggest. Played over 5 reels and 25 paylines, players will be able to stake line bets which stem from 1p up to £4, giving the slot minimum and maximum wagers of 25p a spin, and £80 a spin, respectively. You could walk away with a non-progressive prize, which is worth 1,000 coins in this video slot.

The crystal ball plays a prominent role in this game as a wild symbol. It also doubles as the best paying symbol in the Witch Pickings slot, and is capable of offering up that 1,000-coin haul we discussed a moment ago. Wilds can replace all other symbols save for scatters.

Those scatters appear as three colourful and energetic (and even kind) witches. They can offer you scattered cash prizes if just 2 or more symbols appear anywhere on the reels.

The witches will do much more than just offer you a scattered win, though. They are also capable of offering you a Witches Bonus. When 3 or more such symbols appear anywhere on the reels, you can trigger the bonus. In the bonus, players must choose a total of 3 features for use in a free games bonus round.

Some of the features you can use in the bonus include similar symbols, stacked symbols or special symbol prizes. Other features include expanding wilds, extra wilds, or wild multipliers. The third and final set of features include multipliers on all wins, the ability to win in both directions, or an additional 5 free games.

With plenty of special features for use in the bonus round, you’re going to be quite impressed with everything that Witch Pickings has to throw at you. This game is suitable for players of all preferences.