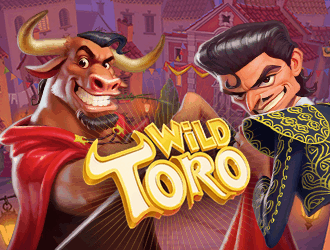 ELK Studios Wild Toro is a 5-reel, 178 ways to win slot machine game, and one which continues this developer’s fascination with Latin themes.

Using wonderful 3D graphics, the Wild Toro slot machine can see players able to stake anything from a floor of just 20p per spin, up to a ceiling of £100 per spin, all the while bagging big wins from numerous bull and matador symbols which crop up on the reels of the slot.

Players can win as much as 200x their total bet with the non-progressive jackpot in the Wild Toro online slot machine.

The Wild Toro icon is this slot’s wild. When it appears, it can substitute for all other symbols in the game, except for other special icons. There are also three bonus features for you to take full advantage of in this slot.

The Toro Walking Wild feature is triggered when the Toro wild icon appears on the fifth reel. He will then run from reel to reel, offering a re-spin as he goes.

The Matador Re-Spin Challenge feature is triggered when players land 3 matadors on the central three reels. He will then become sticky, whilst players pocket a total of 3 free re-spins.

Wild Toro’s main bonus feature is easily the best of the lot. When the matador lands on the reels during the Toro Walking Wild bonus, the bull will chase him across the reels, leaving a trail of wilds in his wake.

Once the bull has knocked off all the matadors, the bonus feature comes to an end. By that point, players will hopefully have pocketed more than a few decent wins.

Wild Toro certainly has the necessarily features to impress slot players across the net.

It’s three main features are original and designed to invoke laughter as well as big wins.

Throw in the fact that this slot is mobile-friendly as well as has 3D graphics and you’ve got a bit of a winner with ELK Studios Wild Toro slot.

The only criticism is that the non-progressive jackpot is a bit on the tiddly side.