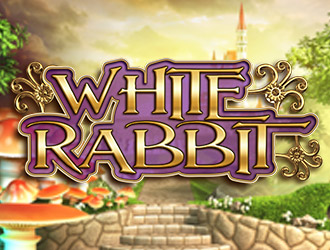 As you may have guessed from the title of this game, White Rabbit is, of course, an Alice in Wonderland themed slot and one which focuses a lot of its attention on the March Hare. Big Time Gaming are the developers of this slot machine, which features their MegaWays payline structure over its 5 reels, which means that it can provide players with a potential 248,832 paylines. White Rabbit is also cheap as chips to play (given the paylines you could end up playing with) with wagers ranging from a floor of just 10p per spin, up to a ceiling capped at £20 per spin. Players can “purchase” bonuses in this game, although that ups the cost of the bet. With all those paylines, though, expect petite non-progressive jackpot prizes worth around about 250x your total bet in value.

Wild symbols do show up in White Rabbit and they are slightly extended. These symbols can only appear on the second to fifth reels, but they can replace any symbols save for scatters, cupcakes and feature drop icons.

Scatters appear as the March Hare and these symbols only crop up on the 3 central reels. Landing them on those reels will see players pocket a free spins bonus round. Scatters only show up in the base game.

Players may wish to keep their eyes peeled for a sleepy caterpillar. This can randomly cough up as many as 4 bonus icons on the screen. Those bonus icons are wilds, can double or triple your winnings, and they can replace all symbols barring feature drop or scatters. Feature drop symbols reduce the cost of “purchasing features”.

The free spins bonus is straightforward stuff in the White Rabbit slot. Expect 15 free games to be dished out to players, whilst cupcake symbols can replace themselves with 2 new icons, giving the reel they appear on an extra symbol. This Extended Reels feature is a hallmark of the White Rabbit slot, and the more extra symbols they land on the extended reels, the more paylines they get to play with. Red queens and wilds can take over the screen if you bag reels 12 symbols deep.

White Rabbit is complex, it offers vast riches via numerous bonuses and it completely overshadows most other simplistic Alice in Wonderland themed slots.