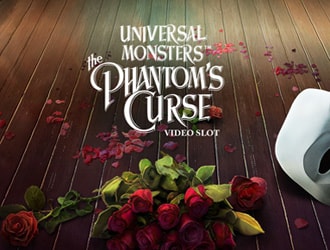 NetEnt likes to produce slots based on various monsters. The Phantom’s Curse slot is just like that. While this character has inspired more than one casino game, we think that this software encapsulates the story’s feel the best.

With high-quality dynamic symbols, a cinematic intro, a detailed background and its handy user interface, playing is loads of fun.

Not only is this game fun, but also lucrative because you get twice as many paylines as you pay for. Plus, there’s a nice array of special features to put a twist on the usual spins.

There are 12 symbols including wilds and scatters. The wilds come in many variants, including stacked and sticky symbols. They trigger bonuses if they fill specific reels too.

First of all, the two main symbols include the Phantom and Christine. If the former fills the first reel and the latter fills the one, Pick and Click feature will begin.

There, you’ll have to pick roses hiding coins and blocker symbols. When you hit that, you’ll move to the second stage featuring three mirrors. Picking one will reveal a multiplier which applies to the coins from the first level.

If the fifth reel is filled with masks instead of Christine symbols in the base game, a re-spin will trigger. All the wilds will turn sticky for the bonus, resulting in two almost guaranteed wins in a row.

Finally, three scatters start a free spins round. The bonus length depends on how many Phantom wilds you land. On the bright side, these wilds are sticky, so your payouts will increase as you get closer to the feature’s end.

Universal Monsters: The Phantom’s Curse slot offers is a visually engaging slot with many exciting bonuses.