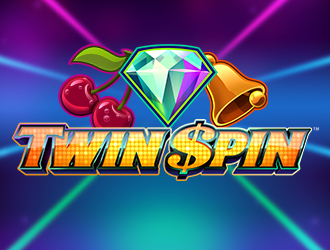 Twin Spin is arguably one of the leading games to ever be developed by Net Entertainment. The slot is played over a cool 5-reel, and 243 ways to win platform. It also features a host of classic and legendary slot symbols, from sevens, to high playing cards, diamonds and beyond.

Given that Twin Spin is a video slot which offers 243 paylines, you have no chance of wagering on them individually. This is okay, though, since wagers are cheap. Coin sizes of 0.01 up to 0.50 can be selected, with players able to bet as many as 10 of those per spin. It might not add up, but players can flexibly wager anything from a floor bet of 0.25 per spin, up to a ceiling bet of 125.00 per spin on Twin Spin. With a spot of luck, they could also be walking away with a non-progressive jackpot worth 1,000 coins in all.

From the off, players will notice that there is something very different about Twin Spin. On every single spin, two of the reels will join together to display identical icons. Well, at least two of the reels will. It is also possible that 3 or even 4 of the reels will display the same symbols. The more reels which are joined together, the bigger and better your chances of wins are going to be.

Twin Spin also contains wild symbols, and these can appear only on the second, third, fourth, and fifth reels of the slot. It is entirely possible that wilds could be displayed on those Twin Spin reels, meaning you could end up with four reels filled with wilds. That would result in a more than sizeable non-progressive jackpot win.

Given the benefits of the features we have already discussed, it probably won’t surprise you to learn that there isn’t really a bonus round included in Twin Spin. The identical reels feature is considered Twin Spin’s main special feature. Throw in that it costs little to spin, and you can win a lot, then Twin Spin doesn’t really need a bonus round.