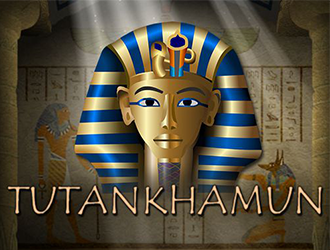 Tutankhamun is a video slot which was released by Realistic Games back in 2014. This video slot is, of course, based on the boy king of Egypt, uncovered by Howard Carter back in 1922. Like other Realistic Games developed slots, Tutankhamun contains a non-progressive jackpot, which is worth 40,000 coins when you play the slot with its maximum stake.

The video slot features so-so graphics, many of which are poor in quality, but relevant to the Ancient Egyptian theme, such as the Udjat (eye of Horus), golden death mask, and a lotus flower. Tutankhamun will allow players to wager up to £10 per spin on its 5 reels and 20 paylines. Minimum wagers will cost you at least 10p a pop, though.

With a RTP rate of roughly 95.42%, wins are frequent enough in Tutankhamun. However, the slot does severely lack in the special features department. It contains wild symbols, and they are represented by King Tut himself. His golden death mask will act as a wild symbol and a bonus multiplier. As a wild, it can substitute for all other symbols in the slot (excluding scatters), and offers multipliers worth 2x, 3x, 4x, or 5x, when 1, 2, 3, or 4 wilds appear in a winning combination. No

If players should land 3 or more scattered bonus icons in any positions on the reels of this slot, then they will trigger a free spins bonus. In this bonus, players will bag an instant cash prize, as well as 15 free games. They will also have all of their winnings tripled in this feature, courtesy of a 3x multiplier. Free spins can be retriggered.

Tutankhamun is not the best Ancient Egyptian themed video slot out there. Nor is it a video slot which contains cracking graphics and a wealth of features. However, Tutankhamun does provide you with ample wins for relatively cheap stakes. That alone has to be admired and might make you consider giving Tutankhamun a run for its money – if you can find it at your casino, that is.