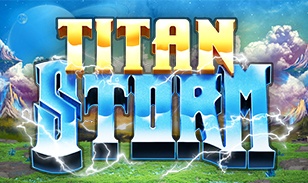 Titan Storm is a NextGen Gaming developed slot and one which is loosely based on Greek mythology. The slot contains a rather impressive 243 ways to win structure, and naturally, players are not going to be able to adjust those paylines.

There is something far more fantastical and epic about this game, than your run-of-the-mill Greek mythology slots. Despite some inventive graphics, they don’t really look the part. As far as wagers go, players can expect to able to stake anything from a floor of 25p per spin, up to a ceiling of £250 per spin on this game. Prizes are worth up to 2,000 coins in all.

Zeus appears in this slot as a wild icon. This rather overly done symbol can substitute for all other symbols in the slot, save for scatter icons. It can crop up on the second, third, and fourth reels of the game only, and doesn’t offer any cash prizes on its own.

Scatter symbols take the shape of a great door, and when these symbols appear on the reels, they can offer you scattered wins worth up to 50 coins. Scatter icons can appear on the second, third, and fourth reels of the slot, and when they appear on all three reels, a feature will be triggered.

In truth, three wild symbols appearing on the reels will also trigger the feature.

Titan’s Storm Free Games Feature is triggered by landing 3 scatters or wilds, as we’ve said. During this bonus round, players will get a total of 10 free spins. During the bonus round, wilds and scatters will join to form a scatter-wild. These can boost your wins by 5x the normal rate of pay and can be used to retrigger the feature.

Titan Storm is a bit of a bust, if we’re being totally honest. Yes, the theme is creative enough, but the graphics are only mediocre, and the feature doesn’t really offer us anything we haven’t seen before, save for perhaps a new way of triggering it.