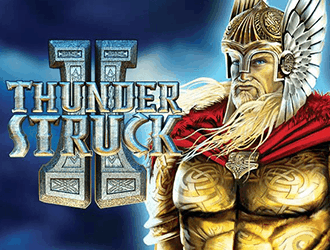 Thunderstruck II is the sequel to Microgaming’s still popular Norse mythology themed, Thunderstruck slot. Although it is over 5 years old, this slot is still one of Microgaming’s most popular titles and was one of the first to feature a 5-reel, 243 ways to win payline, and an achievements platform.

Wagers stem from a floor of just 30p per spin on this sequel, whilst maximum stakes are pegged at £75 a spin. Players can win as much as 2,400,000 coins in this slot machine, via its non-progressive jackpot.

The Thunderstruck II logo appears as a wild in this game, and can not only substitute for all other symbols barring scatters, it can also double the value of any winning combination in which it plays a part.

A Wild Storm feature is also present in this slot, and it can strike at random on any spin. When it does, it can turn up to 5 reels wild.

Scatters appear as Thor’s hammer (Mjölnir) and 3 or more is enough to trigger the Great Hall of Spins feature when they appear anywhere on the reels during a single spin.

The more times you enter the Great Hall of Spins bonus, the better the features get. Enter for the first time to play with Valkyrie’s 10 free spins and 5x multipliers. Enter a fifth time to trigger Loki’s 15 spins with randomly transforming Wild Magic icons on the third reel. A tenth visit to the bonus offers Odin’s bonus of 20 spins with a Wild Raven feature, which can turn random symbols into 2x – 6x multipliers. Enter a fifteenth time to trigger Thor’s 25 spins with Rolling Reels, which can reward successive wins with multipliers worth up to 5x the normal rate of pay.

So many of the features we now take for granted in slots first originated in Microgaming’s Thunderstruck II slot.

This slot is still hugely popular and has rightly earned the status of a legendary slot machine.

It can be found at virtually all top casinos offering Microgaming software and is a must play game.