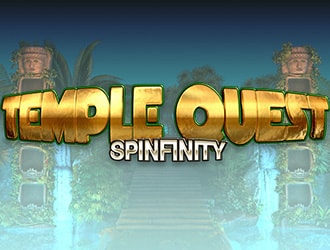 Launched by Big Time Gaming, the Temple Quest slot machine is all about colossal symbols. This Aztec-themed game sure does love to distribute colossal symbols which can seriously bolster your chances of landing a win on this colourful and creative video slot. With 40 lines for you to win on, there’s plenty of action to be had in the game, which predictably costs between 40p and £400 a game. At most, you can hope to scrape together wins worth around 1,000 coins in this game. Saucy and scintillating, Temple Quest is a pretty prosperous release from this smaller-scale casino software provider.

Wild symbols can appear as single icons, and these fiery symbols can substitute for all standard paying symbols in the slot. Like the other symbols, though, it is possible to bag stacked wins with these icons.

There are a few special features to be had in the game, too. If the free spin colossal symbol appears anywhere on the reels, players will trigger a free games bonus.

Landing part or all the princess colossal symbol will showcase several keys, and those keys can then be used to place a petite mini-game which offers instant cash prizes.

A Chest of Fortune bonus can also dish out instant win cash prizes if a chest appears anywhere on the screen during a base game spin.

Players will start Temple Quest’s free spins bonus with up to 16 free games initially. However, by landing more colossal free spin icons on the reels, you can add more free spins to your tally. During the feature, the second to fifth reels can contain colossal icons, whilst the first reel contains standard symbols, bolstering your chances of landing a good win in the game.

Nobody could accuse BTG of not equipping the Temple Quest slot with plenty of features. The colossal symbols feature adds wins pretty frequently to your game, and although it costs a little bit more than many players would like, the win rate in the slot machine is more than respectable.