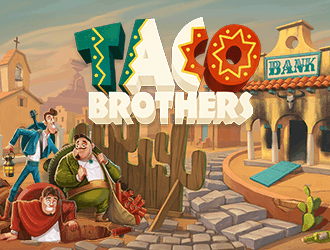 The Taco Brothers is an immensely successful slot for ELK Studios. This sequel, revolving around Christmas, has also proven to be a huge hit.

With its wonderfully 3D graphics and witty theme, there is nothing quite like it on the net. The Christmas edition of the Taco Brothers slot is played over 5 reels and 243 ways to win payline structure.

Players can select total bets which range from as little as 10p per spin, up to a maximum stake of £50 a go.

Wagering just 10p per spin for a 243-line slot is dirt cheap (and unrivalled in the casino world). It also puts you one step closer to winning a 150,000-coin non-progressive jackpot.

Several special features have been included in this slot machine. For instance, players can use the Christmas bell icons to substitute for all other symbols in the slot, except for the safe and Taco Brother wild icon.

If players land 2 Taco Brothers Wild re-spin symbols on the reels, a re-spin will be triggered. When it is, players will get a second chance to land a safe icon to trigger the game’s bonus round.

Three of the same icons will trigger the Wild Escape bonus round in this slot. This is a free spins bonus feature. Players will also pocket multipliers for their efforts in landing safe icons.

During this game’s free spins bonus round, any brothers who drop on the fifth reel will release running wilds.

They will move from reel to reel, substituting for all other symbols save for Captain Diaz and Senorita.

Captain Diaz icons will lock the brothers in prison. Senorita will unlock them. When all the brothers have been imprisoned, the bonus game ends.

Taco Brothers: Saving Christmas is a nice little slot machine game to play, especially at that special time of the year.

It features some rather nifty features, and most players will get a kick out of this natural successor the original Taco Brothers slot machine.