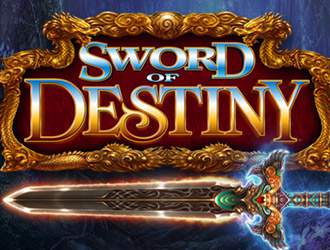 Right from the off, you’re going to notice the unusual gaming structure present in the Sword of Destiny slot. Players are met with 5 reels and either 25 or 50 paylines, depending on which part of the game you are involved in. This Arthurian-esque slot machine from Bally Tech is best played on mobile devices, and costs players between 40p and £360 a spin, which is rather extortionate given what you get in return. An RTP rate of 95.94% is decent, although the non-progressive jackpot of roughly 12x your total bet is positively frustrating. Sword of Destiny is certainly not Bally Tech’s finest hour.

Wild symbols appear in the game in the shape of the titular Sword of Destiny. These icons can replace all others in the game, but they cannot swap themselves out for X-Zone or orb symbols.

During any spin in the base game, one of four randomly triggered features may come into play. These features could throw up to 3 expanding wild reels into the mix, cough up between 4 and 9 random wilds, spread colossal wilds across the reels, or replace at least 2 lower paying icons with better-paying ones.

Pocketing 3 of orb symbols on the first, third and fifth reels will open the second part of the screen (the part with the main character). There, players can select one of 20 orbs to climb a ladder and potentially win big cash prizes, in what is being called the Temple Tower Jackpot bonus.

The X-Zone symbols can trigger a free spins bonus in Sword of Destiny. These icons need to appear 3 times anywhere on the screen. In the feature, players will pocket 8 free games, with each win multiplied by 10x its normal rate of pay. Players can pocket a further free spin for every scatter they locate on the reels.

Sword of Destiny is very a fantasy-themed slot machine game, and one which is ideally suited to mobile users due to its design. It isn’t the most original slot out there on the net, and it can be a little costly, given that winnings tend to be rather poor.