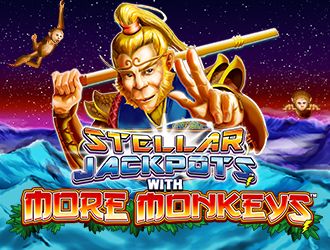 Lightning Box Games are behind the mouthful that is Stella Jackpots with More Monkeys slot. On the face of it, it appears this slot is a Planet of the Apes rip-off, and in some visual aspects it is just that. However, once you start to dive into the features and prizes that this slot has, you’ll soon drop any anger you might have about that. Stella Jackpots with More Monkeys features 1,024 paylines and costs just 60p up to £75 a spin, making it rather cheap given what you get in return, such as frequent wins, even if they are a little on the small side. How small? The top prize is worth just £2,500 in total – you know, unless you win one of the progressives.

Players are going to want to keep their eyes peeled for the Monkey King. This symbol acts as a wild symbol. Wild symbols can replace all others in the game barring scatters, but they only appear on the second and fourth reels of the slot.

Speaking of scatters, players who land 3 or more of those symbols anywhere on the reels during a single spin will trigger a free spins bonus feature.

As for the jackpots, themselves, there are three of them, and they are triggered at random. In the jackpot bonus, players can shoot asteroids and satellites over six levels to win cash prizes. Make it to the end with a decent number of lives and you could win one of the mini, minor, or major progressive jackpots.

Players will start the free spins bonus with 7, 10, or 20 free spins, depending on whether they landed 3, 4 or 5 scatters in the base game. In this bonus, players can choose to play with 8 extra spins, stacked wilds on the third reel, or a random multiplier worth up to 8x. This certainly makes the free spins bonus more enjoyable.

We can say that yes, the Stella Jackpots with More Monkeys slot is a Planet of the Apes rip-off in terms of design; but in terms of features, this slot is one of better titles ever to be released by Lightning Box Games, and is certainly fun and prosperous to play.