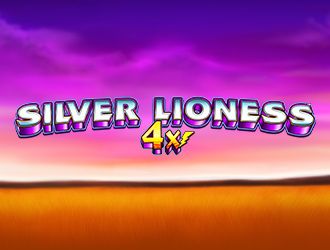 Silver Lioness 4x is, as the name suggests, an updated version of the highly popular Silver Lioness game by Lightning Box. As such, players can expect similar graphics to the original, as well as enhanced, new and innovative bonus features.

As Silver Lioness 4x was released in 2018, it benefits from the latest mobile slot technology and software. This means the game is quick to load and runs perfectly across all devices, including mobile and tablet.

Silver Lioness 4x is played across 5 reels and boasts 1,024 way to win. This, essentially, means that instead of playing to create combinations on paylines, players can win by simply creating a sequence of three or more symbols on the reels.

The slot boasts a safari theme and so the reels hang against a sunset and are filled with animal symbols. There is also a woman symbol, which is the highest paying symbol of the game, and this will reward you with 200 coins for five of a kind combination.

Silver Lioness also comes complete with two different wild symbols. The first of which is represented by a tree and this will appear on reels 2, 3 or 4 and substitute for all other symbols.

The second wild in the slot is the silver lioness symbol, and this can land on any of the five reels. Besides substituting for all other symbols to create winning combinations, it also offers rewards of up to 250 coins.

Aside from the two wilds present in the base game, Silver Lioness 4x also boasts a free spins bonus feature. This is triggered when you land three or more of the diamond scatter symbols anywhere on te reels.

During the free spins round, special Wild Cub symbols may appear on the reels. These act as random multipliers and these can reach up to 36x your winning total.

The free spins round can also be retriggered, which gives you plenty of chances to win over and over again.