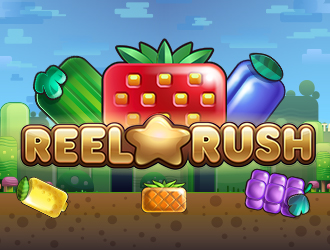 Reel Rush has become one of the most memorable video slots ever launched by Netent. Since it first appeared, players have been dazzled by this blocked fruit symbol slot, and even more so by the 3,125 paylines which appear on its reels.

Reel Rush can cost you a pretty penny, but what do you expect for that many paylines? The game feature coins values of 0.01 up to 0.20, and players can wager as many as 10 of those per spin (obviously not on each line). You are going to find that Reel Rush contains a floor bet of just 0.50 per spin, and a ceiling bet which costs no more than 100.00 per spin.

The special symbol in Reel Rush is a wild icon. When it chooses to appear on the reels, it can replace all other symbols in the game. These golden coloured icons can only appear on the second, third, fourth and fifth reels in the base game, and the bonus round.

Reel Rush’s gameplay is unusual. To begin with, you can only see a handful of the symbols on the reels. The remainder are covered by start symbol. After a win, the player will land a re-spin, during which more symbols and paylines are uncovered. First, second, third, fourth, and fifth re-spins can see you able to win with 135, 405, 675, 1,125, and 1,875 paylines. These re-spins play a part in triggering the bonus round.

As you might expect, the bonus round in Reel Rush is a free spins feature. The bonus is only triggered by landing 5 re-spins in a row. This will see you able to play with a total of 8 free spins. During the free spins bonus round, you will have a total of 3,125 ways to win, as well as all 15 winning spots on the reels. As you can imagine, virtually every spin is a win in this bonus round.