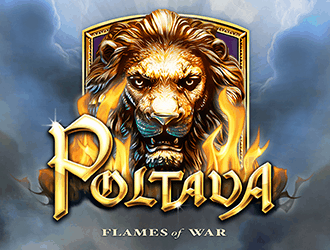 Poltava takes players into the heart of the 1709 Battle of Poltava, between the victorious forces of Peter the Great of Russia, and Field Marshal Carl Gustav Rehnskjöld’s Sweden.

The Great Northern War is represented rather beautifully in this game, which has been designed using stunning 3D graphics by ELK Studios. There are 40 paylines spread over this slot’s 5 reels, but players cannot adjust those.

Using the betting strategies present to them, players can wager anything from 20p per spin, up to £100 per spin, so they do get a two-for-one deal on paylines in this game.

Expect to be able to win up to 180,000 coins with Poltava’s non-progressive jackpot.

Special Features in the Poltava Slot

The Poltava logo acts as this slot’s wild symbol. It appears framed and can substitute for all other symbols in the slot, save for lion icons.

Lion symbols act as bonus icons, and these majestic emblems can trigger the Flames of War bonus round when 3 appear on the reels of the slot.

There is a Marching Reels feature in this slot, which can see stacked cavalry, artillery, or infantry symbols appearing on the reels trigger a re-spin. Any additional arm symbols which appear on the reels can see further re-spins occur, whilst the stacked symbols march across the reels from the left to the right-hand side of the screen. This is a good way to boost your wins.

The Flames of War bonus will see all triggering bonus symbols turn into wild symbols.

Those wild symbols will also act as sticky symbols on the reels, with each subsequent lion which appears on the reels offering an additional free spin.

There are many war-themed slots out there, but many of them are rather poor efforts.

ELK Studios has devised a solid war slot which not only focuses on a real battle in a real war but also incorporates elements of the art of war into gameplay, namely through their Marching Reels feature.

Throw in a free spins bonus and a bonus deal on paylines and stakes and you’ve got a quality slot in Poltava.