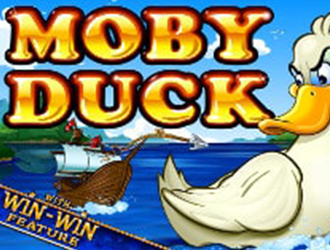 Moby Duck is a cartoony take on Herman Melville’s Moby Dick novel, albeit one which features a duck-hunting fox and a white duck instead of a white whale. This tongue-in-cheek slot machine has been designed and developed by NuWorks, and it contains 3 progressive jackpot cash prizes to be won, as well as a 5-reel and 25-line gaming platform. All 25 lines can be adjusted by the player, with players also able to bet anything from 1p up to 25p per line. This gives the Moby Duck slot machine a wagering range which extends from a floor of 1p per line per spin, up to £6.25 per spin.

Moby Duck’s wild symbol appears as Moby Duck himself. The titular character can substitute for all other icons in the game (barring special symbols) and can also be responsible for a non-progressive prize which is worth a cool 10,000 coins if 5 symbols are struck on a payline – but only in the feature. Wilds can only appear on the first and fifth reels in the base game and can double the value of all winning combinations in which they play a part.

Scatters (or bonus icons, if you prefer) appear as ships. Land 2, 3, 4 or 5 of these anywhere on the reels and you will pocket scattered wins worth 1x, 2x, 20x or 200x your total bet, respectively.

The progressive jackpot prizes in this slot consist of Mini, Minor and Major progressives. These typically offer tens, hundreds or thousands of pounds in cash, respectively, and are won at random.

Landing 3, 4 or 5 of the ship symbols will trigger a free spins bonus round in the Moby Duck slot. Players will start that feature with a total of 8, 15 or 50 free games. In the bonus round, wilds can appear on any of the reels in the slot, and as you can imagine, this will bolster your chances of landing a winning combo on the reels of the game.

Moby Duck is a quirky, entertaining take on the Moby Dick tale, and most players will have a laugh spinning the reels of this slot.