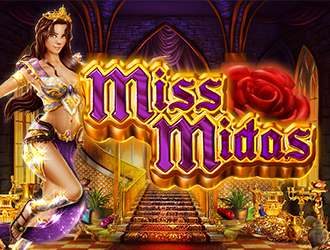 Miss Midas is NextGen Gaming’s own take on the Midas myth. Unlike the Midas Millions slot (which is also themed on the same myth), this game takes it in a new direction, with a powerful woman turning things to gold. It is a nice touch, and one which is sure to lure in players. Miss Midas is played over a typical 5-reel and 25-line setup, however, players won’t be permitted to adjust any of those lines. Line bets can be altered, though, from a low of 1p up to a high of £2. This will adjust your minimum and maximum wagering range from just 25p a pop, up to a high of £50 a spin. On the plus side, up to 2,500 coins can be won in this cleverly designed title.

If you want to get your hands on that non-progressive jackpot, then you will need to line up 5 scatter icons on the reels in any position. Landing 3 or more will trigger a free spins bonus, even if you miss out on the top jackpot.

As for the wilds, Miss Midas herself is the wild icon. She can offer you decent cash wins on her own, too. This wild can replace all other symbols, save for the scatter symbols. Miss Midas is capable of triggering a Golden Touch Feature. When Miss Midas appears, she turns all symbols she touches into gold. Those golden symbols then become wilds. However, you will need to have a SuperBet feature activated for this to happen.

After landing 3, 4 or 5 scatter icons on the reels, you will activate a free game feature. A total of 15, 20, or 25 free spins are available for those scatters, respectively. In the bonus, any golden symbol can turn other Superbet enhanced symbols into gold, too, and the bonus can be retriggered.

Miss Midas is a nice take on the myth, and it is certainly quite a different slot from the Midas Millions game which already dominates this theme. NextGen Gaming has come up with something original, and nobody can fault them for that.