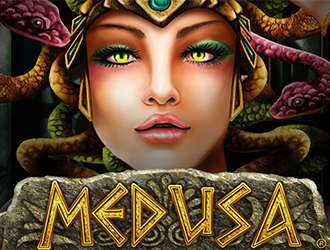 Medusa (and its direct sequel, Medusa II), are hugely successful video slots for NextGen Gaming. The first of these two titles was released in 2013, but it is still just as popular as its successor. The original game tells of the tale of the Gorgons of Greek mythology, monsters who had snakes in their hair, and could turn you to stone with just one look, with one nasty Gorgon in particular its star – the title character, and most famous Gorgon of them all, Medusa.

Medusa is played over 5 reels and 25 paylines, and players have a certain degree of flexibility when it becomes time to wager on the slot. They can stake anything from a low of 0.01 up to 2.00 per line, adjusting their total bet from a base minimum of 0.01 per line, per spin, up to a capped maximum of 50.00 per spin. That’s pretty decent for a slot which offers you 5,000 coins as its non-progressive jackpot.

Medusa has a very nifty feature which players will certainly appreciate. It is actually a kind of bonus. If three or more Medusa icons appear anywhere on the screen, as many as three reels will be turned to stone (turned wild). These expanding wilds will remain that way for a total of 3 re-spins, after which the base game returns.

Another type of bonus in Medusa is the Pegasus bonus. If players can land three or more of these bonus icons located anywhere on the reels, then they will trigger the feature. In it, players must simply choose from one of the winged horse icons displayed on the screen to bag an instant cash prize. This bonus could be worth as much as 50x your total bet.

Finally, Medusa contains a free spins bonus. Land 3 or more of the Medusa title icons on the reels to trigger it. Once there, you will be given a total of 10 free spins, during which all of your winnings will be doubled. If the solider pops onto the screen, you will gain an extra three free spins. These are known as Super Spins, and come with expanded 5x multipliers for those three spins alone.