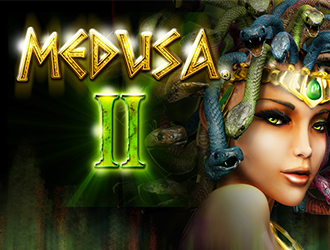 Medusa II is a NextGen Gaming developed video slot, and a sequel to their popular Medusa slot game. This sequel offers 5 reels and 243 paylines to win on, and offers players a decent chance to win with its 97.07% RTP rate. The game contains a non-progressive jackpot, which peaks at 500 coins.

Understandably, players are not going to be able to adjust any of the paylines which feature in Medusa II. The slot can, however, permit you to adjust the value of your coins, which can range from 0.01 up to 2.00 in all. Players are therefore going to find themselves wagering anything from a floor bet of 0.25 per spin, up to a ceiling bet of 50.00 per spin on this slot.

Players will instantly recognise the evil beauty that is Medusa as a wild icon. This Gorgon can appear stacked on the reels, and is also the best paying symbols in Medusa II. She can appear on all of the reels of this game and can substitute for all other symbols save for scatters.

In Medusa II, a soldier may appear randomly during the base game, and attack Medusa. When he does this, she will gaze at him, and turn him to stone. This will leave behind a stack of wild symbols for you to win with.

Medusa II’s scatter icon is the game’s logo. When this icon appears 3, 4, or 5 times in any position on the reels, players will pocket a total of 50, 125, or 250-coin wins. Three or more scatter icons will also trigger a free spins bonus round. In this bonus, a total of 10 free games are awarded to the player, and the Locked Reels feature comes into play.

This Locked Reels bonus feature can see 2, 3, 4 or 5 adjacent reel freeze into place, and display the same symbols as each other. As you can imagine, if you’ve got a wild on the first reel, and the other four are locked into place, you’re looking at a particularly spiffy win.