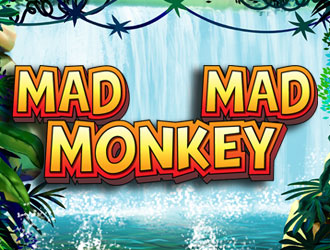 Mad Mad Monkey is a NextGen video slot, which boasts a fun and unique theme. As the name suggests, the game centres around the antics of a crazy monkey and comes complete with a generous free spins feature.

Although Mad Mad Monkey was first released in 2011, it doesn’t feel dated. This is because the graphics are colourful and well designed, and the software runs flawlessly across all devices.

As we’ve just mentioned, Mad Mad Monkey is a five reel, fifty payline slot which boasts a jungle theme. On the reels, players will find the classic 10 to Ace value symbols, as well as parrots, snakes, coconuts and peanuts.

In Mad Mad Monkey, the highest paying symbol is the yellow banana, which will payout 1,000x your wager for a 5 of a kind combination.

The game also includes a wild symbol, which is represented by the monkey himself. This symbol will substitute for all others, to create a winning combination, and will appear stacked on reels 2, 3 and 4. Any win created with a wild symbol will also be doubled, meaning this is definitely a valuable symbol!

Although Mad Mad Monkey only really includes one bonus feature, there’s a lot going on!

In Mad Mad Monkey, players can activate the free spins bonus round by landing three or more of the game logo scatter symbols anywhere on the reels. In activating the round, players will receive 10 free spins, but the fun doesn’t stop there!

During the bonus round, all wins carry a 3x multipler, which means payouts are tripled. What’s more, the monkey wilds are still present (which carry a 2x multiplier) which means your wins could actually be multiplied by six!

In the bonus round, the yellow banana symbol will also appear stacked. This gives you even more opportunities to win big. The bonus round can also be retriggered by landing more scatter symbols on the reels.