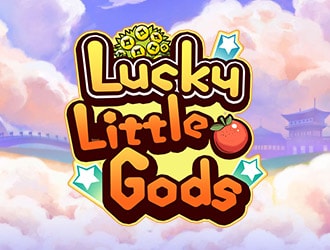 Microgaming have chosen to take on Chinese mythology with the theme of their Lucky Little Gods slot. Based on their classic and much-in-demand 243 ways to win payline gameplay, this 5-reel slot machine has a very anime theme to it, and that has its appeal with a theme such as this.

Players can expect to find wagers which cost between 30p and £300 a game on this title (not out of the realms of normality, we must admit) whilst non-progressive jackpot prizes are capped at 7,500 coins in all if you can land 5 of the red god symbols on any active payline.

Wild symbols show up as the game’s title logo, and these symbols can replace all others save for various scatters, and there are three of those.
The first scatter is a pair of soda drinks, and landing 3, 4 or 5 of these anywhere on the reels will trigger a free spins bonus.

At any point in the base game, a Little Gods bonus may be triggered at random. When it is, players can win between 4x and 40x their total bet on a single non-winning spin.

Two other scatters appear in this game. The Golden Tree bonus is triggered via golden tree scatters on the first and fifth reels and offers an instant cash prize worth between 1x and 15x your total bet. Meanwhile, landing treasure pot scatters on the third reel will see players win between 20x and 100x their total bet via a Treasure Pot bonus.

As for the free spin bonus round, players will begin that with 8 free spins, but every additional scatter they locate will add another free spin to their tally. During the feature, the first and fifth reels are wild.

Lucky Little Gods is a petite, simple little slot, but the wealth of features that the game carries makes it well worth a look. The surplus of scatters can sometimes be infuriating when they stop a winning combo from appearing, though, which is worth keeping in mind.