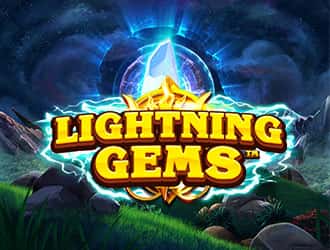 Launched recently, Lightning Gems is your generic, run-of-the-mill gemstone themed slot machine game from NextGen Gaming. There isn’t too much in the way of originality in this game, which is played over 5 reels and just 10 paylines.

Despite the number of lines, players are still going to find themselves wagering anything from a floor of 15p per spin, up to a capped maximum stake of £150 per spin, which is a little steep if we’re being honest. Lightning Gems has a decent RTP rate of 96.48%, whilst its non-progressive jackpot is capped at 2,000 coins in all.

Lightning Gems contains a wild symbol in the shape of a golden star. This symbol can substitute for any other icons in the game (barring scatters) but doesn’t seem to have any cash value of its own to offer players.

In the base game, extra wild symbols may appear randomly on the reel, which can bolster your chances of landing a win.

Blue stars (scatters) can trigger a free spins bonus round when 3 or more appear anywhere on the reels. These scatter icons scarcely offer any wins on their own, but it is the bonus round which most players will be interested in.

Players will start the free spins bonus round with a total of 10 free games. Up to 50 additional wilds may be added to the reels during the feature, and additional scatters will reward players with further spins.

Whilst the random extra wilds feature is active in the free spins feature, a second feature can also be triggered. This Wild Nudge feature can see wild symbols which are just out of view nudged down onto the reels to help players land a win.

Lightning Gems isn’t that overwhelming. In fact, the gameplay is a little bland. It may look the part with its snazzy graphics, but deep down this is just your basic NextGen Gaming developed slot machine, and one with an overproduced theme at that.