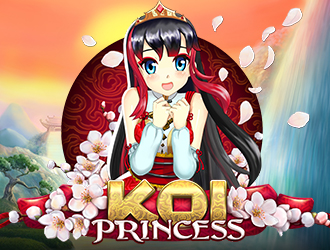 Koi Princess (and it’s mobile casino equivalent – Koi Princess Touch) is a relatively new video slot release from Net Entertainment. The game is played over 5 reels and 20 paylines, none of which can be adjusted by the player. Designed to be totally faithful with the Anime/Manga craze over in Japan, this slot is certainly one of the finest, most original titles ever developed by the Scandinavian online casino software developers.

What makes this slot even more appealing is the 96.23% RTP rate included in the game. Big wins are never very far away, then. Koi Princess can see you able to wager anything from a low of 0.20 per spin, up to a maximum stake of 400.00 per spin at its most expensive. For your troubles, you could walk away with a non-progressive win, which is worth as much as 500 coins in all.

There are many special features included in the Koi Princess slot. First up, there are four randomly triggered features. These are the 5-Hit, random wild, wild reels, and bonus round features. When the player lands any of the first three features, they will pocket 1 free spin with a guaranteed 5 of a Kind combination, random wilds, or wild reels, respectively. Alternatively, the bonus round can also be triggered by landing bonus icons on the first, third, and fifth reels of the slot.

The bonus round consists of four features, and you have no idea which bonus round you will get.

A bonus wheel contains 12 prizes, some of which include multipliers, cash prizes, wild reels, free spins, or a major jackpot prize, the latter of which cannot be won via any other bonus.

Lastly, there is a plain and simple coin win feature bonus which you could trigger. This will often cough up better prizes than the base game, so it too is well worth a look.