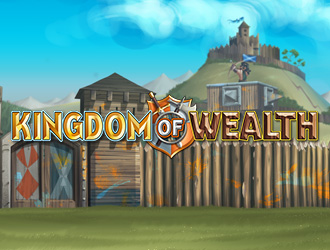 Kingdom of Wealth is a medieval themed video slot machine game and one which has been produced by Blueprint Gaming. There aren’t too many other slots out there quite like this one, so don’t let the 5-reel, 30-line structure fool you. Kingdom of Wealth contains a flurry of special features, so you’ll be spoilt for choice in that department. In regard to wagers, players can choose to stake anything from a floor of 50p up to £250 per spin, whilst they try and hunt down a non-progressive jackpot which is worth up to 1,000x their total bet.

Wild symbols can appear as gauntlet symbols. These golden gauntlets can substitute for all other icons in the game, except for the queen, monk and warrior/barbarian symbols.

When players accomplish achievements in the game, they can increase their rank. Working their way up from serf to King by accomplishing various tasks via winning combinations in the slot brings about better bonuses and prizes. This is hardly a substitute for a good bonus round, though.

Landing queen, monk or barbarian symbols on the first, third and fifth reels can trigger a few nifty features, which include changing symbols, holy expanding wilds, and colossal 3×3 wilds.

Should players land 3 different character icons in “throne spots” they will get to choose a shield via the Battle Bonus. This will multiply their winnings and offer a re-spin, which players can keep bagging until the surrender shield is located.

The Royal Re-Spin feature is landed in the same manner and allows players to pick shields to bag instant cash prizes and re-spins until the collect sign appears. Both of these features are quite alike.

Players aren’t going to like wagering 50p a go on a fixed 30-line slot, but Blueprint Gaming has given players plenty of features to enjoy in this title, and that just might make the difference at the end of the day. The bonuses are plentiful, and that is perhaps why there has been an extra charge on the wagers in this slot.