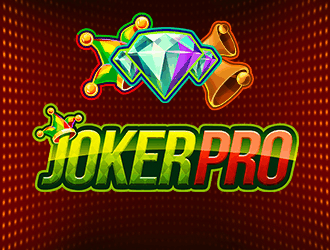 Joker Pro is a popular Net Entertainment developed slot machine game, and one which has a rather sizeable non-progressive jackpot to offer players, capped at 100,000 coins. There is an air of the classic slot world about this game, even though it is, in fact, a video slot. Joker Pro contains classic imagery such as sevens, bells, and diamonds, as well as lucky symbols such as clovers and horseshoes on its 5 reels and 10 lines. NetEnt has a history of doing simple slots really well, and this is a fine example of that. The slot can see you able to select coin values of 1p up to £1 and bet up to 10 of those per line, although all paylines are fixed. Minimum and maximum wagers stem from 10p per spin, up to £100 per spin, respectively.

The jester hat is an interesting symbol to have in this game. It acts as a scatter icon and can land on the second, third and fourth reels of the slot, triggering a Joker Pro re-spins feature. During this feature, the first and fifth reels of the slot will turn into expanding wilds, whilst the three central reels will contain “hot spot” positions. Those hot-spot positions can turn into wilds, too, boosting your chance of landing wins.

It is also possible to trigger the Joker Pro re-spins feature with wild symbols. Those wilds can replace all other icons save for scatters, and can remain sticky during the main bonus feature in this slot.

This slot machine game is very basic, but its special features make an exciting addition to NetEnt’s library. Most players should find Joker Pro an elementary but fun slot and casino gaming experience.