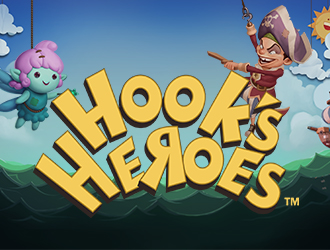 Hook’s Heroes is one of Net Entertainment’s most creative, and clever video slots. Its expert design takes you on a voyage into the land of Captain Hook, and his miscreants. The title is played over 5 reels and 20 paylines, and contains some of the flashiest graphics ever to appear in an online slot.

In terms of how much you are going to wager, Hook’s Heroes is quite a flexible slot. Coin denominations in this title range from the customary 0.01 up to 1.00 in all, and players are certainly capable of wagering as many as 10 of these per line. Players will also be able to engage in a betting range, which extends from 0.20 per spin, up to 200.00 in all. A decent bit of luck can see you win as much as 9,00 coins in all.

Keep an eye out for Captain Hook. This pirate symbol is the wild in Hook’s Heroes, and it can replace all other symbols in the slot save for the scatter icon. There are other, even more exciting features than wilds in this slot, though.

Players need to land 2 of the crocodile pirate icons anywhere on the reels to trigger a Reels Awards bonus. In this bonus, players will get 1 free spin, with a randomly chosen feature. If players land 3, 4 or 5 scatters on the reels, then they will pocket 7, 10, or 15 free spins, as well as one of the features mentioned below.

In the free spins bonus, players might choose to have the Fairy feature activated. This feature promises between 2 and 5 overlaying wilds appearing in random positions upon the reels. Alternatively, they may choose to go for the Mermaid Feature. This will double any winnings you pocket, and quadruple them when wilds appear in the winning combinations. Lastly, you might choose to go for the Pirate feature. In this, players will pocket wins based on how many identical symbols appear on the reels (instead of whether they are in a winning combination on a payline or not).