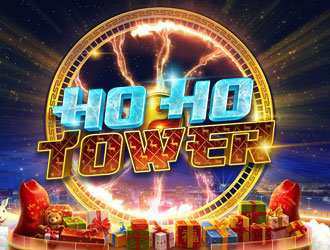 It wasn’t that long ago that ELK Studios unveiled their Hong Kong Tower slot. The confusing but somewhat enjoyable game did quite well for itself; so well, in fact, that ELK Studios have given it a bit of a facelift in time for Christmas.

Ho Ho Tower (as this sequel is known) is a Christmas Edition of the same game and features Christmas symbols instead of the original Chinese imagery.

Expect 99 lines spread over 5 reels, and wagers to stretch from 10p per spin up to £50 per spin courtesy of the Betting Strategies system used by ELK Studios in their games. The top prize in Ho Ho Tower is capped at around 306,150 coins in total.

Players need to land at least 3 of the Yin/Yang bonus icons to trigger Ho Ho Tower’s feature. However, landing 4 or 5 of them will also provide players with 1 or 2 extra lives. Again, landing a mystery symbol bonus will instantly offer 2 extra lives as well as the bonus.

Ho Ho Tower’s bonus feature will be familiar to any player who has tried their hand at Hong Kong Tower before. Players can spin their way across 3 reels to pocket major cash prizes.

They can also pick up extra lives along the way, as they try to use the arrows to cross the reels. If players land in an empty spot on the wheel (and they have no lives left) they bonus round ends.

Ho Ho Tower is no less confusing or complex than its predecessor, Hong Kong Tower. However, the Christmas imagery really gives it an added sense of excitement, especially at this particular time of the year.

In essence, the slot is identical to Hong Kong Tower, save for the Yuletide paint job it has received.