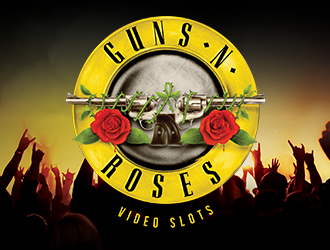 Few slots have been as hotly anticipated as Guns N’ Roses. This Net Entertainment developed slot is one of a trio of rock n’ roll themed games (the others being the upcoming Jimi Hendrix, and Motörhead slots). It is also one of their finest ever music themed slots.

With a pay-rate of roughly 96.98%, this is also one of their most generous slots. Guns N’ Roses is, of course, themed on the hit band themselves, mainly during their heyday. The slot offers you coin sizes of 0.01 up to 1.00, and you bet as many as 10 on each of this 5-reel slot’s 20 paylines. At its cheapest, Guns N’ Roses will cost you 0.20 per spin. At its most expensive, it can cost you no more than 200.00 per spin. Guns N’ Roses has a non-progressive jackpot which is worth as much as 7,500 coins in total.

There’s certainly no shortage of special features in Guns N’ Roses slot. The game features the band’s logo as its wild icon. This wild can appear randomly on all of the reels, barring the third reel. Wilds can replace all other icons save for bonus symbols.

An Appetite for Destruction wild is also present in this slot. This icon appears as a giant cross, and is randomly triggered. It is capable of spreading itself over the central three reels of this slot.

The niftiest feature in this slot (although it isn’t a bonus), is the ability to change songs whilst playing. You have all of Guns N’ Roses’ biggest hits to choose from, whilst you spin the reels.

Once players have landed the record icon on the first, third, and fifth reels of the base game, they will trigger one of three bonus rounds. The Encore Free Spins bonus offers stacked wilds increased on every spin, whilst the Legend Spins feature offers overlying wilds. There is also a Crowd Pleaser Bonus in which players can pocket instant cash based on how loud the crowd screams. A bonus wheel will determine just which bonus you land. Also on the wheel is a multiplied cash prize, ranging from 4x to 10x your total bet.