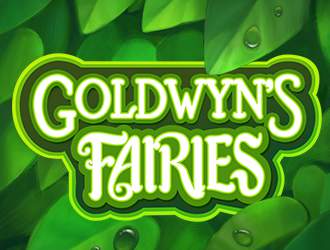 Fairy-themed slots always tend to do rather well in the online casino world. Goldwyn’s Fairies is a fine example of that. This slot has been developed by Just for the Win, although it was released on Microgaming’s Quickfire platform. Players can expect to be able to spin 5 fantastical, fairy-themed reels and bag wins on 20 lines in this game. Goldwyn’s Fairies is cheap as chips to wager on, too, with bets costing just 10p at their cheapest, and £250 per spin at their costliest. If fate is kind to you, players can expect to be able to walk away from this slot with a non-progressive haul with 25x their total bet. To be fair, what do you want for just 10p per spin?

Wild symbols appear as green symbols. There is something very “Irish-luck” about those symbols, which can replace all other icons barring re-spin and Returning Wilds, as well as the slot’s scatter.

Re-spin wilds can only appear on the third reel. When they do show up, standard wilds will become Returning Wilds. Further re-spins can be won with this feature until no new Returning Wilds are created. A final spin is then awarded to players, with all wilds “returned” to where they were over the course of the bonus.

Scatter icons appear as the game’s title logo and these can trigger a free spin round when they appear on the first, third and fifth reels during a single spin.

In the feature, players will start with a total of 10 free spins. The first 9 of those spins features the Returning Wilds we mentioned earlier, whilst the final spin does not. On the final spin, all the wilds which have popped up as Returning Wilds will pop back onto the screen, offering you a great chance to bag big wins.

Goldwyn’s Fairies sounds original, with its Returning Wilds feature. However, this Super Spin bonus is present in other games. None of that should be held against the game, though, which is a fantastical treat to play on account of it being so cheap.