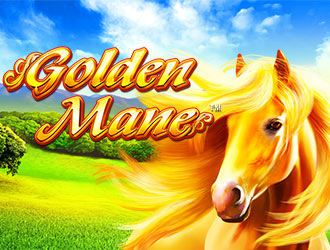 If you were expecting lions, you’ll probably be surprised to find that NextGen Gaming’s Golden Mane slot machine is about horses. This 5-reel, 10-line slot launched in August 2017 and is very basic, very primitive and very elementary in terms of both its design and features. There aren’t too many horse-themed slot machine games out there on the net, and unfortunately, Golden Mane isn’t going to make us remember the genre, either. The slot isn’t cheap (costing between 30p and £60 a spin even though there are only 10 lines) but its RTP rate and non-progressive jackpot stand at 96.96% and 1,500x your total bet, respectively.

The titular golden horse is the wild symbol in Golden Mane, and as a wild, it can substitute for all other symbols barring bonus icons. Those bonus icons appear in the form of a silver horseshoe and can trigger bonus features in the game.

At any point in the base game, scatter icons may be added at random to the second, third and/or fourth reels, giving players a second chance to trigger the bonus round, just in case they didn’t land 3 scatters with a standard base game spin.

When players land 2 or 3 silver horseshoe symbols on the second, third and/or fourth reels, they will pocket between 2 and 6 free spins. Players will notice that the first four spins see wilds replacing already existing symbols. On the first, second, third and fourth spins, an extra wild replaces the white, black, mountain and tree symbols, respectively. Further spins can be won by landing extra scatters during the free spin bonus feature.

Truth be told, Golden Mane is a little flat. The fact that extra wilds don’t continue for all six bonus features is disappointing. The added fact that wagers are far costlier than the number of paylines offered in the game is also a bit of a shambles. Golden Mane won’t be galloping into the hearts of online casino players at any point in the immediate future.