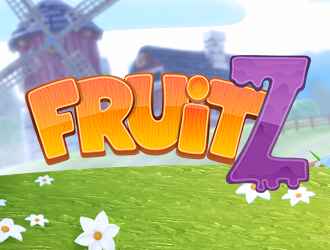 Foxium are the developers behind the FruitZ slot machine game. Be warned, though; this slot contains particularly punishing graphics for players on older machines and this can not only slow the game down but slow your system down too if you don’t have modern software and hardware.

The graphics in this game are certainly overkill, especially for what amounts to nothing more than a simple fruit machine game.

FruitZ is played over 5 reels, with just 3 humanoid looking fruit symbols appearing on each reel.

FruitZ isn’t exactly cheap to play, either. A single spin on this 25-line slot machine game is set to cost you at least 25p per game, which is a bit steep for a glorified fruit machine.

There is just one special symbol which can help you along in this slot machine game. That special symbol is a wild icon. Wild symbols appear as cherries, and they look particularly irritated to be appearing in this game.

Wild symbols also double up as the best paying symbols in the slot, so as well as substituting for all other symbols in the game, they can also see you win the non-progressive jackpot which is worth around 1,250 coins as we’ve said before.

The other symbols which appear in this game include sad, pathetic looking humanoid apples, strawberries, lemons, watermelons, mangoes, plums, oranges and pineapples, and they offer cash prizes which range from 7 coins up to 625 coins.

There are no bonus features included in Foxium’s FruitZ slot. They probably didn’t think it was worth it given the high quality of the graphics. Even so, it is a real shame that there isn’t even an instant win feature or a free spins bonus to be had.

FruitZ is something of a disappointment if we’re being honest. A special feature would really have helped this slot out. Personally, this slot machine would have worked a lot better if it had so-so graphics (making it run smoother on games) and more special features.