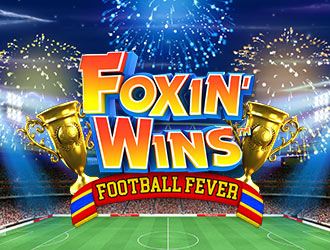 Ever heard of Foxin’ Wins? Well, NextGen has released yet another version of their classic game. This time, our favourite fox pups and Mr Fox return with a football fever.

The game was released at the time of FIFA World Cup 2018. However, you can enjoy it just as much today. It contains all the best features from the first Foxin’ Wins slot and its sequels. So, if you’ve played those before, you’ll already know all about this game too.

Basically, Foxin’ Wins Football Fever slot is a redesign of the same game. But, since it was so good in the first place, we can’t even be mad about. Not when we love football so much, anyway.

The best thing about Foxin’ Wins Football Fever is the Super Bet feature. As in other slots with Mr Fox, you can choose how many fox pups will be hiding behind the reels. Each one can randomly turn one symbol into a wild.

You can have from one to five pups there and the more you do, the more you’ll have to wager on each spin. But while it costs more, Super Bet increases RTP of the slot, which means a better theoretical chance to win.

Aside from this, there are three additional features in the game:

The prizes from these random features vary between 2x and 50x your original stake. As for the free spins, the regular slot rules apply and you get a 2x multiplier on top.

Foxin’ Wins Football Fever is as exciting as the World Cup itself. The only difference is that you’re the player.