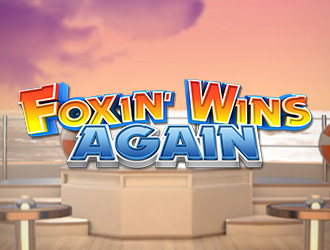 This video slot is the sequel to NextGen Gaming’s Foxin’ Wins. It is much more elaborate and entertaining than its predecessor, with players able to land even more special features than ever before, thanks to the Super Bet feature in this 5-reel, 50-line slot, which also contains a top non-progressive prize worth 5,000 coins.

Players are not going to be at liberty to adjust any of the paylines which appear in this game. Instead, they are going to have to rely on altering their coin values. These can be switched from a low of just 0.01 up to a high of no more than 2.00. Understandably, this will alter your total bet. Wagers will vary from a minimum of 0.50 per spin, up to a maximum of 100.00 per spin. Using the Super Bet feature will cost you even more.

The fox is a wild in Foxin’ Wins Again. This wild symbol can appear 2, 3, 4, or even 5 times on the reels to provide you with cash prizes which could be worth as much as 2,000 coins in all. Players can also use the fox symbol to substitute for all other symbols in the game, excluding the scatter icon.

With the Super Bet feature, you can expect fox pups to jump onto the reels and to turn other symbols into wild icons. The more you wager extra, the more fox pups will assist you in your game. Moreover, during free games the fox pups appear even more frequently.

Should you find yourself with 2, 3, 4 or 5 of the bell icons on the reels, then you will pocket scattered cash prizes of 50, 250, 750, and the non-progressive jackpot of 5,000 coins, respectively. These are the scatter icons in Foxin’ Wins Again. They can also offer 10 free games when 3 or more appear in any position on the reels. Players can also enjoy a Second Chance feature in this bonus, and enjoy a frenzy of wilds if they have the Super Bet feature activated.