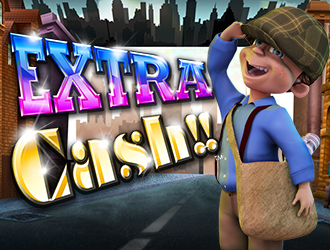 Extra Cash is not the most well-known of NextGen Gaming’s video slots, but this newspaper delivery themed video slot is certainly a spectacle to behold. Designed using absolutely quality 3D graphics, Extra Cash is a 5-reel, 50-payline fun-fest, and one which could see you win as much as 500 coins via its non-progressive jackpot.

With so many paylines on the reels of this game, of course you were always going to be able to adjust them as you see fit. You can also adjust the value of your coins, from 0.01 up to 0.20 in all. Players on a budget will be delighted to hear that minimum wagers cost just 0.01 per line, per spin. You don’t have to be flush to place a maximum wager, either, with that fixed at 10.00 a pop.

Players are going to find that the newspaper is a wild symbol. This wild icon has “extra” written across it, and also doubles as the best paying icon on the game. When it appears, it can substitute for all other symbols in the slot, barring the scatter. After any spin in the game, extra wild symbols may be added to the reels of the game. When they are, you can be sure of landing a rather special, and sizeable win.

At any point in the game, a re-spin feature may be triggered. When it is, players will be given an extra chance to either improve their free games feature with additional scatters, or to trigger the bonus in the first place by landing extra scatters. Those reels with decent symbols will be held, whilst the remainder will re-spin.

If players are fortunate enough to be able to locate 3, 4 or even 5 of the scatter symbols in any position on the screen, then they will instantly unlock a total of 8, 12 or 20 free games to play with. Any wilds which appear in the free spin bonus round will be held for the duration of the feature. If you’re wondering, scatters also cough up scattered prizes.