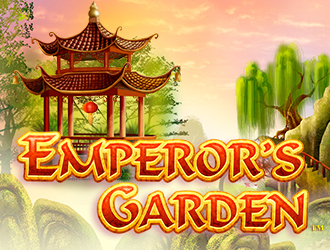 Emperor’s Garden is a peaceful, and tranquil video slot which features a few 3D graphics, as well as 5 reels and 25 paylines of action. The slot can be played over 5 reels and 25 lines, with players having absolute control over those lines, and what they wager on them. Emperor’s Garden will permit players to choose coin sizes from 0.01 up to 2.00, which is normal for a slot of this calibre. At its cheapest, the Emperor’s Garden slot will cost you just 0.01 per line, per spin. At its most costly, it can set you back 50.00 per spin. Emperor’s Garden carries with a non-progressive jackpot of 5,000 coins. To win that, you need to line up 5 of the emperor icons on any active payline.

As for the game’s special features? Let’s start with wilds. Wild symbols are represented by the zen garden. These symbols stretch over an entire reel, making it an expanded wild symbol. Wilds can substitute for all other symbols in the slot, with the exception of the scattered Koi icon.

Those scattered koi icons can be used to offer you scattered wins of 2x, 5x, 20x, or 100x your total bet. Scatter icons can also trigger a free spins bonus game in the Emperor’s Garden video slot.

A small gamble feature has also been included in this title. After any win, players may choose to activate this feature from an option below the reels. If they guess incorrectly, they will lose their winnings. Guess correctly, and they could double or even quadruple them.

If a player lands 3 or more koi fish on the reels, then they will win a total of 10 free games. During those free spins, all wins with wild symbols are tripled. Standard wins in the free spins bonus round are not, so you really do need to make sure that you get as many wild symbols as possible appearing on those reels. Ideally, they will be expanding wild symbols, too.