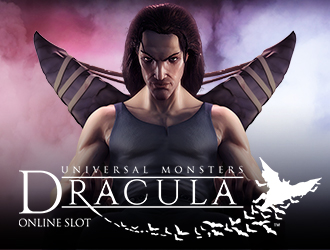 Dracula is one of those slot games which was hotly anticipated before its launch, and rightly so. This online video slot is only loosely based on the Bram Stoker tale, and instead features a more modern look and feel to it. Dracula even wears a tank top in this slot, which features stunning 3D graphics and animations.

Net Entertainment’s Dracula contains a total of 5 reels and 40 paylines, but you won’t have to wager on each of those individually. On the contrary, minimum wagers cost just 0.20 per spin on this game. At its most costly, Dracula can see you wager as much as 200.00 per spin. With a stroke of luck, you can win as much as 200x your total bet in this non-progressive slot game.

Dracula and the lady (whom one can assume is Mina Murray), are stacked symbols in this video slot. Should a player land Dracula stacked on the second reel, and Mina stacked on the fourth reel, then the player will trigger a free spins bonus round.

At any point in the slot, bats may randomly fly across the reels and turn symbols into other icons. When this happens, it can really boost your chances of success. This doesn’t quite make up for a wild in the base game, but it is a feature which is unique, and prosperous.

As for the bat feature, well that just gets a little bit more special in the bonus game. Unlike the base game – which contains random bat features – the free spins bonus round offers you every time. On every single spin of the bonus round, Dracula will explode into a colony of bats, which will then turn many symbols into others. They can even spread more wilds about the place, which really helps with big wins.