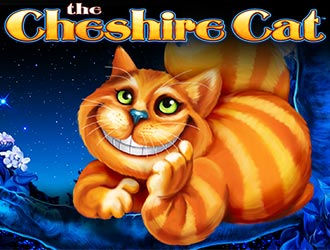 If somebody says, “Cheshire cat” to you, the first thing you think of is Alice in Wonderland. Rightly so, since that forms the theme of this WMS Gaming developed slot machine. Cheshire Cat is a 5-reel, 40-line slot machine, and one which contains all your classic Alice in Wonderland elements, whilst maintaining that Cheshire Cat spin-off theme which makes the slot so appealing. Cheshire Cat offers up 40 paylines on its 5 reels, and players won’t be able to tinker with those. They can alter their lines bets, though which range from 40p up to £400 a spin on this slot. As for prizes, a non-progressive jackpot worth 500x your total stake is up for grabs in the Cheshire Cat slot.

Players will want to keep their eyes peeled for the Cheshire Cat, as he appears as a wild symbol in this game. Landing the Cheshire Cat on the reels will see him substitute for all other icons, except for the slot’s bonus icon. The wild is also the best paying symbol in the game.

Super stacked symbols have their perks, too. A Super Stacked feature will see one symbol randomly become stacked during every single spin in the game, which bolsters your chances of landing wins.

Players who land 3, 4 or 5 wheel bonus symbols will trigger a total of 5, 10, or 20 free spins in total. Players can prosper from wild reels in this bonus round, with up to 4 reels there to be turned wild over the course of the bonus feature. Aside from that, there isn’t too much to write home about when it comes to the slot’s feature. However, players are guaranteed to win at least 10x their total bet in the feature, which certainly counts for something.

Cheshire Cat certainly looks far better than it plays, although there isn’t really anything terribly out of order with its gameplay. It could be better, though, with wins being a little less reliant on getting a decent super stacked symbol on each spin.