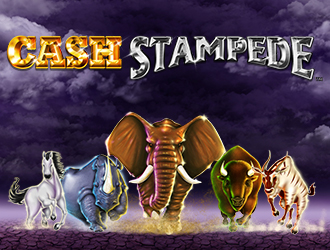 The Cash Stampede video slot is based on animals migrating (well, stampeding) across the plains of Africa. These are majestic looking species, and the slot is one of the few NextGen Gaming titles to actually serve up 243 paylines upon its 5 reels. That will impress players.

Understandably, you are not going to be able to wager on all 243 paylines individually. Firstly, you are going to have to choose coin values which stem from 0.01 up to 2.00 in all. From there, you can place bets which stem from 0.25 per spin, up to 50.00 per spin at most. The good news is that the slot also carries a non-progressive jackpot which is worth 100x your total bet.

Players should be able to easily identify the wild symbol in this slot. It appears as the Cash Stampede symbol, and it is only capable of appearing on the third reel. When this symbol does appear, it can replace all others save for scatters.

If players win with any animal symbol combination, then they will trigger a Cash Stampede Re-spins feature. This bonus will offer you a standard re-spin, and as long as you keep landing more winning animal symbols on the reels, you will keep bagging re-spins.

If players can locate 3 of the golden coin bonus symbols on the second, third, and fourth reels of the Cash Stampede slot, then they will trigger a free games bonus, as well as land a 50x their total bet instant cash prize.