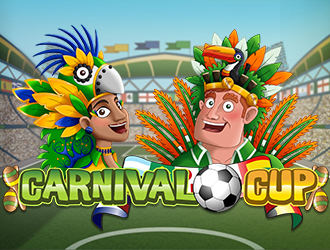 Carnival Cup is one of the only football themed video slots to be released by Nektan Gaming. It is a rather comical football slot, which was released in time for the 2014 World Cup in Brazil.

It may be a few years old now, but there are still plenty of prizes for you to snap up playing this mobile favourite. Carnival Cup only actually contains 9 paylines on its 5 reels, so it is something of a small but sweet slot.

This also makes it as cheap as chips to play, with wagers costing no more than 9.00 at their most expensive, and as little as 0.01 per line, per spin at their cheapest.

Players will also find that they can win as much as 2,500x their total bet in this slot, which is a whopping sum for such a petite title.

Naturally, there aren’t going to be too many special features in this slot. Carnival Cup contains a championship trophy as its wild symbol, and this cup is easily identifiable on the reeks. It is the shiniest symbol. The icon can replace all other symbols in the game, barring the scatter icon.

That scatter symbol is represented by the free spins symbol. When this icon lands anywhere on the reels three or more times, players will trigger a free spins bonus round. This is the same as virtually all other video slots, whether they are developed by Nektan Gaming or not.

After landing 3 or more scatter icons the reels, players will instantly discover how many free spins they have landed. Up to 30 can be won in all, and players will be able to bag more than decent wins in this bonus, which is the only one of its kind in the Carnival Cup video slot.