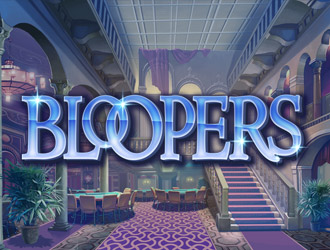 Of course, Bloopers is based on movie cock-ups, of which there have been several clangers over the years. None of those are directly referenced in this ELK Studios developed slot, though, with the slot generally preferring to stick to a basic movie-theme, with images resembled pin-up babes and James Bond lookalikes running through its veins. Bloopers contains 243 paylines spread over its 5 reels, and understandably, players aren’t going to be able to mess about with those. They can use the flexible wagering range to bet anything from a floor of 25p per spin up to a ceiling of £100 per spin on Bloopers, though. As for prizes, the most you can hope to get out of the game is a non-progressive jackpot worth 600x your total stake.

The best paying symbols in this slot machine are the wild symbols. As well as being able to dish out the non-progressive prize, these symbols can also substitute for all other icons in the game, save for scatters. Wild symbols have a comedic appearance, taking the shape of the 20th Century Fox logo, although in Wild Bloopers format.

Scatters appear as Walk of Fame stars. Players need to land 3 or more of these symbols anywhere on the reels to trigger a free spins bonus round.

At any point in the base game, one of the five Bloopers characters may wander on the screen and trigger a feature. In the base game, only the Sound Tech can appear, but when he does he can offer sticky wilds and a re-spin.

During the free games feature, it is possible for other randomly triggered Bloopers characters to offer goodies. As well as the Sound Tech, the Stunt Man can transform symbols into expanding wilds, the Cutter can trigger a collapsing reels feature, and the Make Up Artist can award additional free spins. The Fix It character can also offer a symbol shuffle feature. As for the main free spins bonus, it contains sticky wilds on the second, third and fourth reels.

We’ve seen plenty of film-themed slots, but Bloopers has got to be up there with the best of them, in sheer terms of what it can offer players via its features.