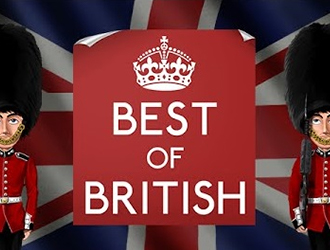 Best of British is, as the name suggests, a British themed casino slot by Nektan. As such, you can expect patriotic graphics, great gameplay features and a flawless performance across all devices.

Best of British launched all the way back in 2014 but its charming theme means that it doesn’t feel dated at all. What’s more, as a Nektan title, it’s exclusively available to Nektan casinos which means you can play it right here at TouchLucky.

Best of British is a five reel, fifteen payline slot which, as we’ve just mentioned,  boasts a very patriotic theme. The slot, as the name suggests, is centered around British culture and so symbols on the reels include fish and chips, a double-decker red bus and a teapot.

The highest paying symbol of the game is the Best of British logo itself and this will reward you with 500x your wager for a five of a kind combination. The game also includes a bulldog wild, which will substitute for all other symbols to create a winning combination, apart from the scatter.

Best of British players can enjoy a highly entertaining base game, yet the action really begins when you trigger one of the slot’s two bonus features.

Stacked Wilds
Within the base game, the bulldog wild may appear stacked at any point. This means wild symbols will fill at least one of the reels, giving you plenty of chances of creating multiple winning combinations.

Free Spins
The free spins feature in Best of British is by far the most rewarding part of the game. The round is triggered when players find three or more underground symbols anywhere on the reels in the base game, and players will receive 30 free spins immediately.

Yep, you heard us correctly! That’s a whopping thirty free spins just for triggering the round. What’s more, the round can be retriggered, which means you can quickly stack up free spins upon free spins.