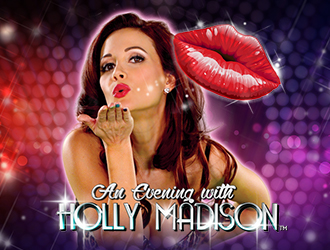 An Evening with Holly Maddison is a video slot which is based on the woman of multiple careers, the ever flexible Holly Maddison. What you have with this video slot is a flashy, realistic, and fully licensed video slot, which takes in gambling, girls, and masquerade as part of its theme.

An Evening with Holly Maddison contains no less than 25 paylines on its 5 reels, none of which players can adjust. Players can alter their coin values, though, from 0.01 up to 2.00 in total. This will also see them able to wager anything from a low of 0.25 per spin, up to a maximum capped bet of 60.00 per spin. Why the extra bet? You’ll see in just a moment.

The reason you pay a little more than the number of lines in this slot, is due to the sheer volume of special features present in the title. An Evening with Holly Maddison contains a Holly wild, which can see the superstar appearing on the second, third, and fourth reels of the slot. Wilds cannot replace scatters icons in this game.

At any point in the game, Holly may expand to cover an entire reel. When she does, she will create even more wins for you. Land 3 wilds on the reels to bag even bigger wins.

The scatter symbols in this slot is the lollipop. If the player lands 2 or more on the reels, they will pocket scattered wins. However, if they can land 3 or more, they can win 10 free games. During the free games, layers have the chance to collect kisses. The more kisses you get, the better your Photoshoot Bonus will be.

If players land just 2 scatters, they could have a chance to bag a third with a Rockin’ Re-Spin feature.

You’re not guaranteed a jackpot in the Photoshoot Bonus, but if you trigger the bonus round, you will walk away with some top prizes. In this feature, simply pick the kinds of clothes you want Holly to wear in her pictures, and you could walk away with a prize.